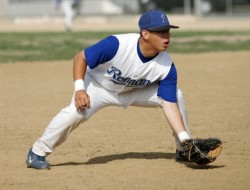 The Roman Baseball team seemed to be a little upset after losing it's first league game against Maywood HS last week. Unfortunately, Orthopaedic had to come to Housh Field to face a determined Varsity Team.
Newly acquired Luis Casco (moved up from the JV team) led the way going 3 for 4 with 5 RBI's and the Romans defeated the Vipers 25-1. Senior Valdemar Espino (1-0) pitched a complete game, striking out 10 Vipers and allowed only 1 hit in 5 innings, with the game being ended early by the 10 run Mercy Rule.

The Romans play their first road league game on Thursday against the First Place Santee Falcons. This game will be another test for the Romans in their attempt to regain first place and repeat as Southern League Champions!!!
Published April 1, 2008 Print